I make these every year for Halloween to add to my chili. I don't put the cheese slice in there, just use cheese hotdogs instead.

This is the recipe however on Pillsbury's site. They have a lot of great recipes!

Costumes, candy, and mummy hot dogs—that’s what Halloween is all about! Have your little ghouls and goblins help prep dinner by wrapping the Crescent dough strips around hot dogs. They’ll love seeing these simple-yet-spooky mummies bake into cheesy, crescent-wrapped mum...
By Pillsbury Kitchens
Updated Jul 30, 2021

Posted by Ghostpeeker at 10:01 AM No comments:

So an update on what has been happening on my end...

The past few years has been a crazy ride! Do you all remember Gladys Kravitz? Yeaaaa I ended up with a neighbor just like that! Thankfully a lot of my spooky decorations kept her off the property, that and a few other measures I had to take. I lived way out in the boonies and had no trick or treaters beyond my friends I had made while living there. So it was only their family of 5 or 7 that came up to start their Halloween night with. It was really nice and I had kept my Haunted Cave up in one of the garages all year round.

With my son needing closer medical attention however, we decided to sell the house. Plus of course we didn't need the drama of the crazies on the road and realized it was a huge mistake to buy a place at the end of a private road that was also a right of way. (More on that on another blog! LOL, ask me if you want that url). Plus being in the mountains of Maine, you really do need the proper equipment to plow. There just isn't any way around that one! LOL I don't like relying on others but that's what I had to do.

A lot of other changes took place with work and all too. So after a change in realtors, we were able to sell the house earlier this year! YAY!

We moved all of our things into several storage units. Yes, including the Halloween decorations like I mentioned in my last blog post.

I am in an apt building now so not really much I can do to decorate. I did get permission to decorate in front of it but of course I had to be careful of what I did and didn't want to leave it out there and all. I was told there was not much trick or treating here. :( So sad!

They do a trunk or treat kind of thing out in the field across from the building I am in and that happened the day before Halloween. Sooo sad!!

I was still out there tho' and only saw a few others who live in the apt but no ToTs! :( 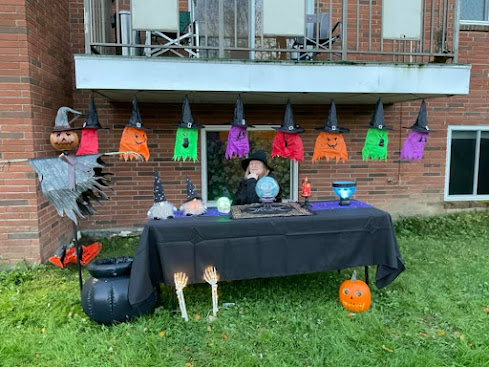 This was a metal scarecrow from Plow and Hearth! I love him! He just screws together, no nuts or bolts! Love it! There is a place inside his head to put a light so may just work on a solar one for him there. I could tell he needed to have a spotlight tho' on him at night. 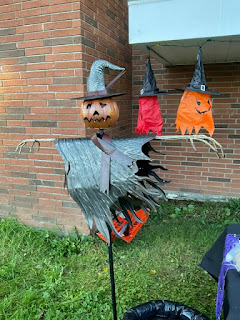 I found a Madame Leota crystal ball that is animated. This is not as big as I would have liked it to be but it was motion activated and worked quite well with a few good phrases. Also that lighted bowl on the right is amazing! One of those fire and ice type of swirling lights inside it making it glow so bright! Plus the candle there is a tornado glitter swirling one that is very bright as well! It swirls for 8 seconds, then off for 8, on again 8. 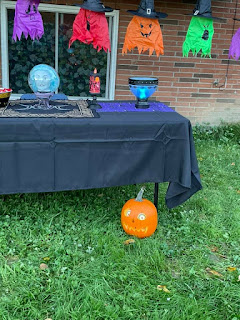 To the left on the table are a couple of witch gnomes whose beards light up. :) I also picked up the skeleton hands in the ground and they also have lights on them. The blow up cauldron for water bottles to hand out. And of course the ghost witches hanging up have battery operated lights. It was cute and fun! 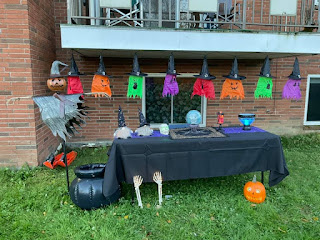 Now the Jack you see also had these cute light up eyes. I carved him as the 31st Jack O'Lantern for the Great Pumpkin Project! Here is more info on that:

I took that on this month and it was quite a challenge! I was not prepared and started off a week late.
So I was playing catch up, but it was so much fun to do! 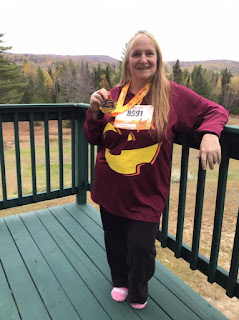 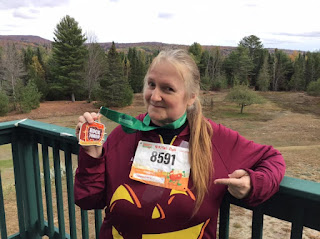 That was a blast as I ran the mile trail in the woods I owned. So that was amazing and you get medals and all when you sign up and I would reward myself with those as I completed each run I had signed up for. I also had apple cider and apple cider donuts waiting for me when I completed the run. 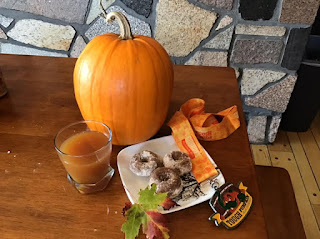 Very sad tho' to not get any trick or treaters! But the candy will get sent to a friend's daughter who will take it to her college dorm. :)

All the novelties that were part of the giveaways will just get put into a bin for next year's giveaways where I hope to be in a new home! :) We can hope! But the search now is on for that place to call my own.

I did get to spend some time with other Druid friends and we had a great Samhuinn ritual! I played the Callieach which is a favorite role to play! We wrote what we wished to let go of on bay leaves to be burned as we let go of those things in our lives that no longer serve us. Honored the ancestors and called out to those family and friends who have departed this realm as they are remembered and missed greatly.  And then the feasting began! :) Afterwards there was a late night divination with my tarot cards. It was a lovely time spent with dear Druid friends old and new alike. For me, it's not over either. I celebrate Samhuinn all week long all the way to the astrological time for Samhuinn, when the Sun is at the 15th degree of Scorpio which is November 4th this year.

I hope you all had a great Halloween and blessed Samhuinn!

Posted by Ghostpeeker at 7:31 AM No comments:

I've been through a couple moves and came across a lost Monster of the Month box that I had not opened up yet. So I wanted to share it with you all!

I've been getting settled in since we've sold the house and all of my things went into storage, including all the Halloween decorations! Oh nooooo!!

I know there are a few more lost boxes! So as I come upon them, I'll be sure and share them with you all! :)

Posted by Ghostpeeker at 7:04 AM No comments:

It was hard to sleep the night before Monster Camp! But I somehow managed it. I had no idea who all was going to be my class mates, but I ended up seeing a couple suspicious looking guys in the dining area. And sure enough, they ended up being at the camp as well.

Allen picked us up in his Dark Hour van and a few of us clamored in, introduced ourselves and away we went!

The first day is orientating us with the shop as we pick our spot and Allen goes over a few things, explaining what is on the table before us and different things around the shop. After that, we get right to it! Aprons on and we take out our pics we brought with us for a guide.

We were to bring 10 pictures with us at the very least of an idea of what we wanted to sculpt. Allen came around to talk to each of us as he instructed us how to put the clay on the head form before us. 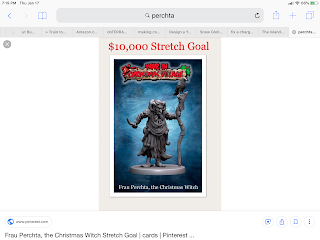 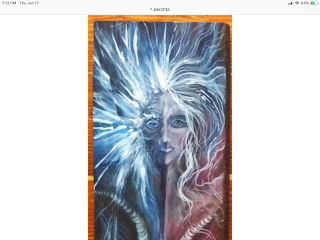 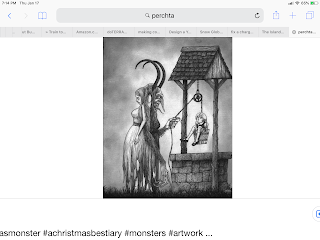 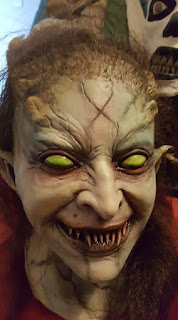 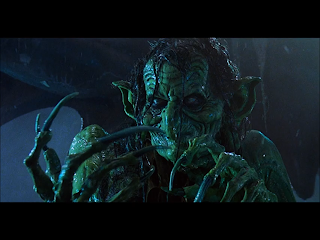 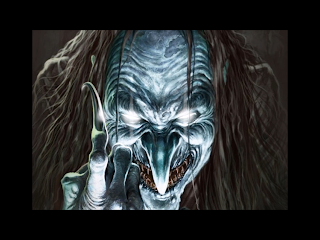 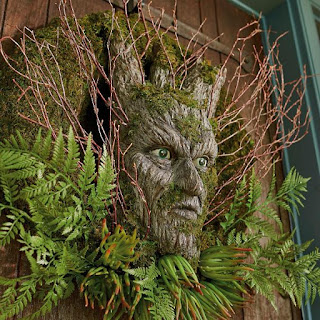 I've never sculpted before, so this was a first for me but there was no time to dawdle, we had sculpting to do! All day! Friday is sculpt day and our first task was to get clay on the head form and sculpt out the basic shapes. Raking it out and then smoothing it and add more clay, take some off, slice here, slice there, tweak here, tweak there.

Now and then, Allen would come over to see how you are doing and give us a few tips. He noticed my ears I was sculpting were a bit too forward and explained how ears are slightly tilted back. Also my face I had sculpted was a bit off. So he told me he was about to scare me and took the wire tool and made it taut and then sliced the face off! OH NOOOO!! Hahaha! I was thinking oh crap, I am gonna have to do it over but no, he just lifted it up carefully and placed it where it needed to be. :)

I was like wow! What a cool trick! That just kinda blew my mind!


For the nose, I wanted to give her an owl beak so I could bring in aspects of this area of Maine with the owls we have here. 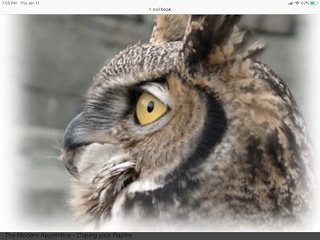 And then, I got the idea to instead of having a scar on her brow, I would have a brand. So instead of it being indented, it would be raised. I had found a magic symbol that means divine justice and I sculpted that right onto her brow. I stood back and looked at it (another tip from Allen) and I realized it was up too high on her head and I really wanted it down. So when Rob came by and I expressed that to him, he was like, well move it then! :) So I did! Ha! 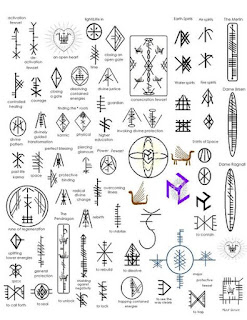 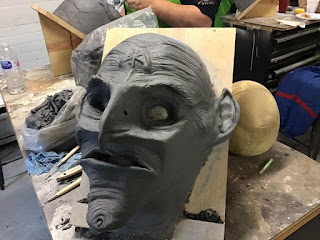 So when it came to the ears, I did the same thing. I lopped them off only to move them. Then I could see the ears were too thin and tried to add more clay to one part and they were off then and not matching and it was starting to become frustrating. So I just took them off completely and started again. This time, I took equal amounts of clay in each hand and applied them to either side of the head (another trick from Allen) and began to sculpt them with my fingers. It worked out much better and I really liked her ears after that. 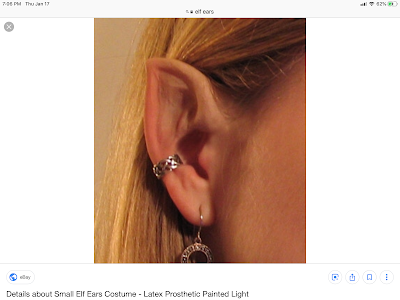 While we sculpted, Shannon arrived with lunch and said hello to us. It was finger food to go and grab and eat when we were hungry and then right back to sculpting. No time to sit down for a long break, we had to get this knocked out at least for the most part so that Saturday we could do detailing that we might like and then be ready to mold before lunch.

(To be continued!)
Posted by Ghostpeeker at 8:07 AM No comments:

Nearest Haunts to You

Around the Brim - Favorite Links

The Many Crinkles of the Crooked Hat

Links of the Outer Realm 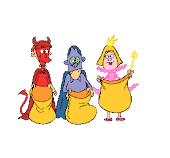 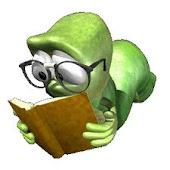